This event follows the inaugural Pancrase event by only three weeks and features nine of the ten fighters that were involved last time out. The fights below, plus thousands of others are available on UFC Fight Pass. If you would like to sign up for a subscription (which I heartily recommend) you would be greatly supporting MMA Flashback by clicking on the banner above.

The only new addition to the card is Dutchman Joop van de Ven, who is facing Katsuomi Inagaki. Van de Ven drops Inagaki with the first straight right he throws and follows up with some slaps that echo around the arena. The Dutchman is clearly the stronger man and is getting the edge in both the striking and grappling exchanges. There’s a break as van de Ven forgets to open his hand and lands a punch and as they restart, both men are landing heavy shots. Inagaki attempts to throw van de Ven but ends up on the bottom back mounted. Several times the fighters get tangled up in the ropes and the referee restarts them standing. van de Ven seems to be struggling with the language barrier and the rules. Following a restart, Inagaki unloads a barrage that puts van de Ven down. He seems fairly compos mentis on the ground while receiving his count and it looks like he decides he’d rather just not bother anymore and give it up as a bad life choice.

Next up is Takaku Fuke against El Guapo; Bas Rutten, who has a big “R” drawn on each hand to remind him to relax, as in theory, there’s a 10 minute time limit on the bout and he doesn’t want to blow out too soon. He opens up with a front hick which doesn’t quite connect, and Fuke charges in for a takedown. Bas attempts a guillotine, but has no guard and can’t hold on. Fuke pops out, briefly mounts, then rolls for an arm bar. Bas reaches out for the ropes which causes a standing restart (each fighter gets a maximum of 5 of those in a bout, but loses points for it). They go straight back to the canvas, and again, Bas attempts a guillotine from the bottom, but again without guard, so Fuke pulls out. He again attempts to grab an arm, but this time fails and as they get back to their feet, eats a knee to the face from Bas. They clinch and Bas brings up another knee to the liver. It shuts Fuke down and he rolls up into a foetal while the referee counts down to 9. He attempts to spring to his feet at 10, but his body won’t let him and he collapses back to the floor. Two in a row for El Guapo. 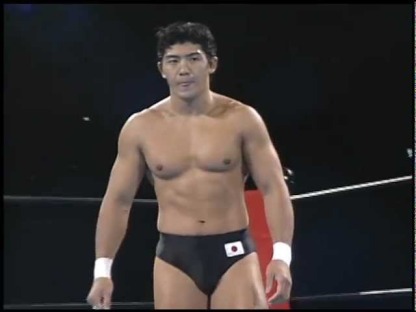 Our third fight is Pancrase co-founder Masakatsu Funaki, who lost to Ken Shamrock in the previous event’s headliner. He’s facing Ryushi Yanagisawa, himself coming off a loss to Bas Rutten. The pair exchange sledge hammer roundhouse kicks to the body, with Yanagisawa coming off worst and ending up on his back taking a count. They re-engage on the feet and Funaki is having the better of it. As Yanagisawa covers up, Funaki reaches down and grabs a leg, taking the fight to the ground. He works for an ankle lock and as he starts cranking, Yanagisawa reaches for the ropes which gets them stood back up, but only briefly. Fugaki has the fight straight back down, and this time cranks a knee bar so far, Yanagisawa can almost taste his boot when he’s tapping. Great fight.

The penultimate bout is Vernon White against undoubtedly the most intense looking dude on the card; Minouri Suzuki. After exchanging kicks, the fight briefly goes to the ground, but White grabs the ropes to get a stand up. Back on their feet, White starts to grow in confidence, throwing a variety of spinning kicks, so Suzuki takes him to the ground where he clearly has the advantage. There’s another stand up when White manages to find the ropes with his feet. Following a third standing exchange punctuated by a huge spinning head kick by White, they go back to the ground, and in a transition to a possible arm attempt, Suzuki manages to catch White’s head in a leg scissor and almost snaps his neck before getting the tap. Not a submission you’ll see very often.

The main event is Ken Shamrock vs Kazou Takahashi. Compared to the other fast fights, this one is a back and forth marathon, with both men having success standing and grappling. Ken maybe has a slight edge, being a little heavier handed and a little stronger on the ground, but Takahashi has his successes too. Half way through the bout, Ken secures an arm triangle from the bottom and reverses Takahashi, who reaches out for the ropes with a foot and the referee breaks them for a stand up. Before he can prise Ken off, Takahashi is asleep. The referee gives Takahashi a little time to wake up, then issues Ken a yellow card warning for holding on after the instruction to break. On the next ground exchange, Ken almost secures the same arm triangle choke, but again, the ropes save Takahashi.  Ken follows up by felling Takahashi with a clean straight right hand, but Takahashi makes the count. Ken starts to become steadily more dominant from this point on, both striking and grappling. Takahashi throws everything he has into a knee bar attempt, but from 50/50 position comes off worst and almost loses his own leg. The referee restarts them on their feet after getting caught up in the ropes, but Takahashi looks like he’s struggling to stand. Ken batters Takahashi striking, and when they go to the ground again, he’s straight to work on a heel hook which gets a quick tap. Excellent work by Ken and a really good showing by both fighters.

Before the UFC was born, there was Pancrase. Ken Shamrock entered UFC 1 as “King of Pancrase,” and many UFC and Pride legends were alternating their appearances in those promotions with Pancrase events. This promotion’s back catalogue isn’t quite as easy to get hold of, but where I can, I’ll include Pancrase events in the chronological list of event reviews. Fortunately UFC Fight Pass has several classic Pancrase events, and are adding more all the time. To watch them, click on the banner above and sign up for Fight Pass. If you love fighting, you really won’t regret it.

The first fight of the night is between Minouri Suzuki vs Katsuomi Inagaki. There’s a notably different facial expression on the two fighters’ faces. Inagaki looks a little nervous. Suzuki looks like he’s about to eat someone’s soul. Suzuki takes the fight to the ground early and after a brief grappling and striking exchange, drops back to a 50/50 position. He’s to securing an ankle lock, but Inagaki is able to roll out of it, getting his back taken in the transition. They get tangled up in the ropes, so the referee restarts them on their feet. There’s some booted kicking and open hand striking as per Pancrase rules, before Suzuki takes the fight back to the ground. As Inagaki scrambles back to his feet, he gets caught in a standing guillotine, which Suzuki uses to drag him back down, take his back and from there he works in a rear naked choke. Inagaki grimaces, starts to tap, but goes to sleep in the process. Suzuki wins by submission.

Next up is Ryushi Yanagisawa against living legend Bas Rutten. Yanagisawa sends out a low kick which Bas catches, then fires back a thunderous one of his own that generates a gasp from the otherwise eerily quiet Japanese crowd. He follows up with a head kick and a straight right hand that drops Yanagisawa who only just makes it back to his feet before the count of 10. Bas lands another short but powerful combination and Yanagisawa is back on the floor, reconsidering his life choices that have led to him being on the wrong end of El Guapo. He slips peacefully into unconsciousness, and Bas wins by KO. After some celebration, Bas helps roll Yanagisawa into the recovery position and check on him a couple of times before heading back to the locker room. Classy guy.

The third fight of the night is Takaku Fuke vs Vernon White. Fuke has White on the canvas within a few seconds and dominates him, initially almost removing his head from a side headlock, then switching to an arm bar that White submits to before losing the limb. A quick night’s work by Fuke.

Our penultimate fight of the night is Kazou Takahashi vs George Weingeroff. This was Kazou’s first of 61 professional fights spanning two full decades. In contrast it was Weingeroff’s only ever fight. After eating a couple of heavy knees to the face, he was finished off with a head kick just over a minute in. Whatever he went on to do with the rest of his life, he obviously didn’t fancy doing that again.

The final bout of the evening is the promotion’s co-founders, Ken Shamrock and Masakatsu Funaki. Although they were friends, business partners and Funaki was Shamrock’s mentor, from the power of the opening kicks, you can tell this is no pro wrestling work. The early striking exchanges are fairly even, but when they go to the ground, Ken has the upper hand throughout, mounting and riding Funaki. Only when Ken attempts a leg lock does it even up to a stalemate and the referee stands them up. They’re back to the ground in short order with Ken in full mount. Funaki attempts to buck him off but Ken transitions to a tight arm triangle which eventually gets the tap. A jubilant Ken Shamrock wins the Inaugural Pancrase main event.

It’s a very subdued and dignified martial arts event, compared to the ferocious UFC 1 that was to follow a couple of months later. Highlight of the night for me was Bas Rutten, who’s one of my favourite human beings, and the whole event, short as it was, was very enjoyable.